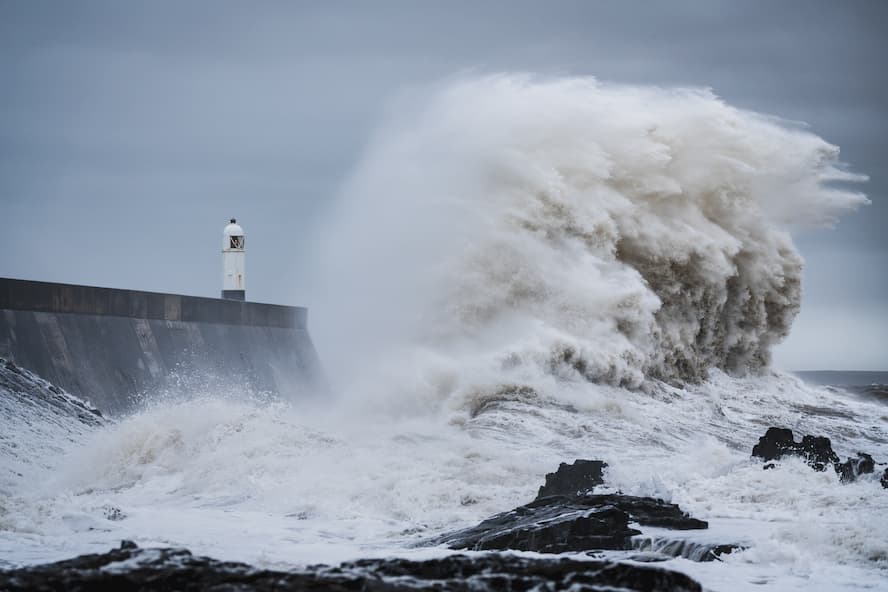 Cornwall is well known for its weather both good and bad, the winter months can be bleak and persistent with a continual onslaught of bad weather, rain and strong winds are frequently a common occurrence.

Some may want to avoid this dismal weather but for others the power of a good winter storm is intoxicating, as nature unleashes its powerful forces. Winter is an amazing time to experience the natural beauty and wonders of Cornwall and shows the region in a completely different light.

Cornwall is one of the few places in the country that is exposed to the full onslaught of the immense winter weather systems that roll in off the Atlantic Ocean. Accompanying the gales force winds are enormous waves that batter the rugged coastline further shaping it physically. The raw power of storms has been known to shift tonnes of sand to create whole new landscapes. When the Atlantic swells it really lashes the coastal areas, with the swell rising and the salty sea spray splashing putting on an almighty display of force.

The seas can be cruel and unforgiving with many lives lost and buildings succumbing to its perils over the generations however, if sensible and careful there is little danger from these majestic storms and storm watching here in Cornwall is a truly wonderful manifestation, and puts on a truly spectacular show.

There are plenty of great spots in Cornwall to storm watch and see the vast scale of the tremendous physical force of nature as it pummels the cliffs, towns and villages along the coastal areas, all providing a dramatic backdrop to mother nature. Unfortunately there are often casualties to these storms in the way of damage to properties and financial loss too.

Most importantly stay safe and don't take any unnecessary risks, check tide times, stay well clear of cliff edges and be careful near the water, the high winds and tremendous seas are obviously dangerous and above all unpredictable, be cautious at all times. You could stay inside, warm and cosy and take pleasure in watching the wild weather raging outside from the comfort of your window-side seat safe inside as the storm hammers relentlessly on the window panes.

Storm watching is a unique and exhilarating experience. It is a different way to enjoy the country and provides amazing photo opportunities.

For really great photos this is the destination to come to, here you can watch the sea wash over the old mining buildings. It is remarkable thats these relics of Cornwalls rich mining industry have remained intact whilst being frequently battered by nature. It makes you think what it would have been like to mine here with a storm roaring outside.

The Rumps can be found at the end of Pentire Point headland in Polzeath. These jagged rocks are recognisable as they appear like teeth rising from the sea. Another dramatic storm watching spot as the storm unleashes its energy sending huge plumes of white water into the sky during tempestuous oceanic weather.

Stepper Point is home to the infamous Doom Bar at the mouth of the Camel estuary, it is said that mermaids waited here to lure sailors to disaster. The stunning rock formations at Hawkers Cove result in mountainous waves from the Atlantic crashing the west coast and sending spray reaching far inland. Whilst the very strong winds rattle nearby windows.

The stepping stones of giants, the rugged granite rocks at Bedruthan Steps provide a striking backdrop in fierce storms as the colossal waves crash down on these iconic sea stacks. There is a fenced cliff-top viewing point a safe height from the churning seas below, you can watch the huge waves safely from this vantage point, just be aware of the winds and don't get too close to the edge.

An iconic storm watching location, owing to its position jutting out into the deep sea in the far west of Cornwall. Cape Cornwall identifies the position where Atlantic currents divide. Owing to this, the storms have a tendency to be much bigger and more intense than other areas along the coast, waves crash into the cliffs with such ferocity that water is sent high overhead. The best vantage point is the old mining chimney stack that caps the headland.

Located just around the corner from Land's End, it is the perfect spot to observe the wild ocean as it unleashes against the rugged coastline. The long sandy beach is prized by surfers capturing Atlantic huge rollers that crash over the Cowloe Reef or against the imposing granite cliffs, a potentially dangerous area. The South West Coast Path makes for an invigorating walk. If you don't want to leave the safety and comfort of your home you can watch the storms on the Sennen Cove webcam.

Penzance is well known for the huge waves that make a presence during stormy weather, they surge in and engulf the promenade or the open air pool, they have a tendency to get energetic causing damage to nearby structures. Witness the explosive foaming waves crashing over the harbour and drenching sea front cottages.

Harbours tend to create the biggest waves and the harbour here at Portleven is the ultimate location for dramatic photos and lots of exhilaration. The surrounding harbour walls are ideal environment for the currents to swell and force huge waves to drench the town. In strong winds the waves can rise to the amazing height of the clock tower on the edge of the harbour. For amateur storm watchers you can take refuge in the hills on the opposite side of the harbour and watch from this safe vantage point whilst still feeling the excitement.

This is a particular well known storm watching spot, the iconic 'Monkey Hut' that stands at the end of the harbour was destroyed in a storm in January 2014 but, has been rebuilt. Pilots would shelter here when signalling and guiding ships into the dangerous harbour entrance. The same storm also destroyed sections of the harbour wall, these have also since been rebuilt. This destruction demonstrates the sheer force of the storms. Here the harbour and cliffs provide a great sense of scale as to the height of the waves rolling in. You can park on the hill leading south out of Portreath and appreciate the spectacle from this elevated position as waves crash into the end of the harbour wall.

If you are feeling brave and can withstand the wind in this exposed corner you will be rewarded with a breathtaking display of power at this dramatic spot which takes the brunt of many storms. See the storm clouds approaching and watch the waves tower over Taylor's Rock out at sea. Once here you can opt to remain in the wild winds otherwise you can take shelter in the one of the two cafes and enjoy hot refreshments whilst watching the immense waves pummel the craggy cliffs and crash into the distant lighthouse and rocks below.

There are a number of webcams around the county these offer a safe and good opportunity to witness a storm.