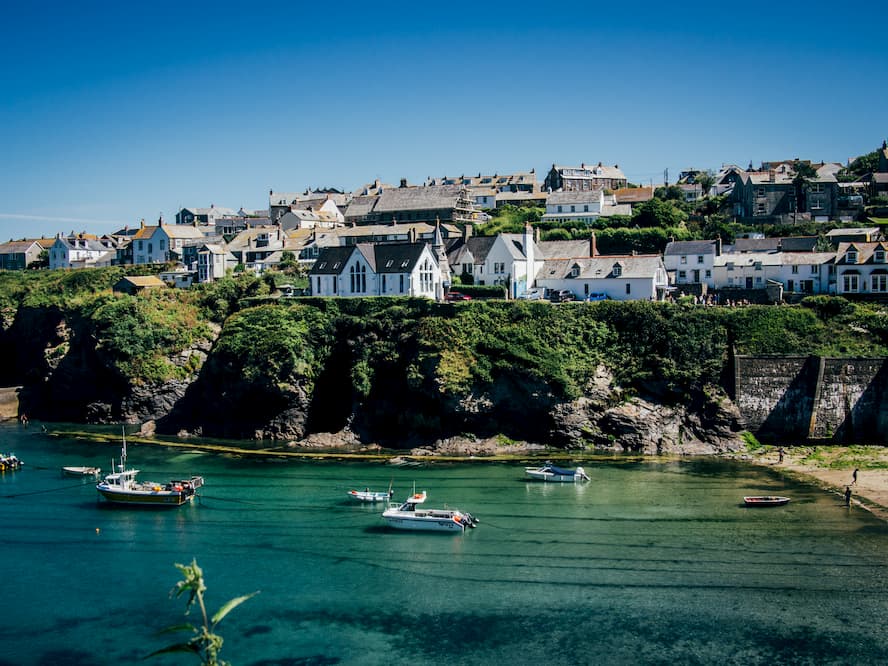 Published in: Days Out

The popular and engaging TV show starring Doc Martin has cemented the charming and quaint fishing village of Port Isaac foremost on the top tourist destinations here in Cornwall.

Although, it has always been a fixture for tourists. Port Isaac is found in an area of outstanding natural beauty on the Atlantic coast of North Cornwall.

The village itself has a long and fascinating history dating back to King Henry VIII, with historic buildings and lots of beautiful views. Photo opportunities abound so keep your camera at the ready.

Nestled in a valley, with cobbled narrow alleyways and jumble of whitewashed cottages that line the picturesque harbour is Port Isaac a sublimely scenic location. Throughout this bustling village are the well known and recognisable haunts of the characters of the fictional seaside village of Portwenn.

Sitting atop of the cliff of Roscarrock Hill, overlooking the fishing boats which haul in their daily catch of lobster and crabs, is the pretty stone house used as the home and surgery of the awkward and disagreeable Dr Ellingham, played by Martin Clunes, one of the most identifiable buildings from the programme. Boasts impressive views of the village.

Further along the secluded bay is the 18th century Georgian pub, The Golden Lion, where the cast and crew meet for a drink both for work and socially. It has a lovely rustic interior, serves great food and Cornish ales, is welcoming and the staff are friendly making it the ideal place to stop off after a day exploring.

Then there is the dominant amphitheatre of its natural harbour. During the evenings in the summer The Fisherman's Friends, a sea shanty group sing traditional fishermen songs, they can be heard on the Platt and raise money for charities. A free evening concert in a beautiful setting with the harbour as a backdrop. They tend to start their Platt sessions around the end of May and finish at the end of August, keep an eye out for them.

When the tide is low you can explore the harbour and to the left you get a good view of Bert's Restaurant and Doc Martin's house above on the hill.

The popularity of the village attracts hordes of visitors to this charming location. The roads are extremely narrow with a steep incline so it is advisable to park your car in the large car park on the main approach road, and walk down.

There are walking tours to take you to all the familiar places featured in the show. The tours are operated by a former extra of the show, along the way you will hear filming facts, stories and anecdotes about the actors, along with all kinds of other local trivia and history.

Featuring in the tight and twisty streets of the village are the iconic locations of his wacky neighbours including, The Peapod Shop, Central Garage on New Road (the Garage), the iconic painted van used in filming to promote the Large Restaurant along side the Bay Hotel (Wenn House), set at the top of the hill.

A few private residences serve as locations such as Sea Cove Cottage on Fore Street is Louisa's home, The Old School House is Portwenn School, Little Dolphin's house in Middle Street is Mrs Tishell's chemist shop, up the hill from Dolphin Street is No. 26, Aunt Ruth's House, and Liberal Club serves as the village shop. St Nonna’s is a beautiful 12th century church in the centre of the village, it was the site of the Doc's ill-fated wedding to Louisa.

The shop, Buttermilk Confections serves as Mrs Tishall's Chemist, this is the only interior used for filming so you can literally step into the TV show's set. Inside you will find lots of pictures of the cast and the owner, Mr Meakin. He was an extra on the show and has lots of stories to tell of his time on the show. He sells a map guide of the locations which is really useful and a nice keepsake from your visit.

Most of the interior scenes are shot at Roscarrock Manor Farm which is just outside Port Isaac, it is home to a sound stage and a number of sets, such as the surgery. Is also used for outside shots of the surrounding area.

In December twinkling lights are put up around the harbour which further adds to the villages charm.

It is not surprising fans regularly make pilgrimage to this picturesque town, it has a quintessential charm.