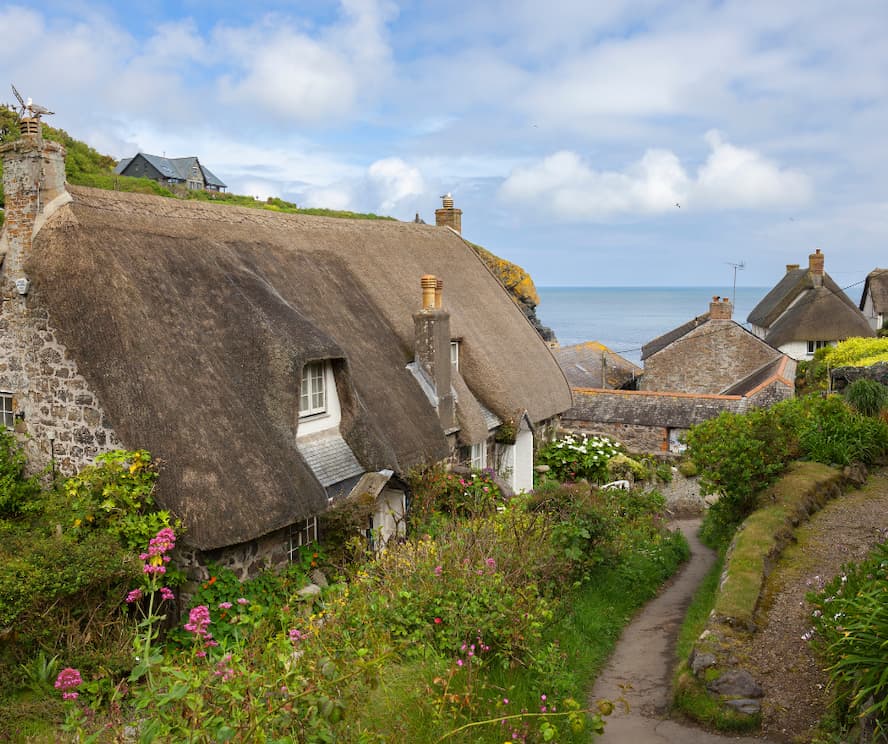 Cornwall is well known for our traditional whitewashed fishermen cottages that can be seen throughout the duchy, but there are a number of architectural delights to be found here also. In the past wealthy landowners were not shy in displaying their wealth in the houses and buildings they commissioned.

Elaborate and grandiose buildings were constructed throughout the county with many still standing today.

Silvanus Trevail was the most prominent architect of the 19th century and was responsible for many fine buildings here in Cornwall. They include the Carbis Bay Hotel, Castle Hotel, Tintagel and Great Western Hotel, Newquay as well as a number of schools and a hospital.

Here are some of our favourite grand, unusual and often elaborate buildings, some are not essentially that old but in our opinion are interesting.

This unusual and flamboyant house certainly catches your attention. It is located on elegant Chapel Street in the heart of Penzance. With its ornate lotus columns, stylised cornices, obelisks and sphinx-like adornments it certainly captures the essence of a folly. It was built in around 1840 by a John Lavin a bookseller and mineralogist, when all things Egyptian were a craze, following Napoleon’s campaign in Egypt in 1798.

This quirky building was formerly a museum and geological repository. Today it is home to a natural cosmetics company. The building did fall into disrepair in the 1960s, but it was acquired by the Landmark Trust in 1973 and they have sympathetically refurbished the property and brought it back to its original splendour.

A magnificent and exotic building that is well worth checking out when in Penzance.

This an unusual and whimsical place. It has 11 staircases; 15 back doors and 82 chimneys. The roof covers half an acre of space and never in its entire history has it been entirely watertight. It is one of the most fascinating and historic places here in Cornwall.

Dating back as far as the 6th century, it is considered to be the oldest continually inhabited building in the United Kingdom. It was once home to Augustinian monks; is the historic seat of the Earl of St Germans the family have lived here for hundreds of years. It was extensively remodelled in the 18th century by Sir John Soane. It is home to a wealth of treasures, exquisite furniture and art with works of art by Romney, Ramsey, Van Dyck and many of the Dutch Old Masters.

The ancient house is open on certain days throughout the year for guided tours, and visitors can explore life below stairs. However, the picturesque gardens are open daily to visitors.

Literally translated Carn Brae means hill of rocks in Cornish and it aptly fits this building. Carn Brae castle is half built on a pile of rocks and half on the ground, which enhance its rustic appeal. It was converted into a castle folly by the Basset family around 1790. It was designed to be used as a hunting and feasting lodge.

Perched on one of the highest points in Cornwall, it is positioned on an elevation of 750 feet (215m). It is constructed of granite and built in the romantic gothic style. This tiny fortress has four turrets, a central building and decorative battlements.

Today this Grade II listed building is a Greek restaurant with log fires, candlelight and incredible views over Cornwall. It is a truly majestic setting and the views from the roof are spectacular even on a misty night. 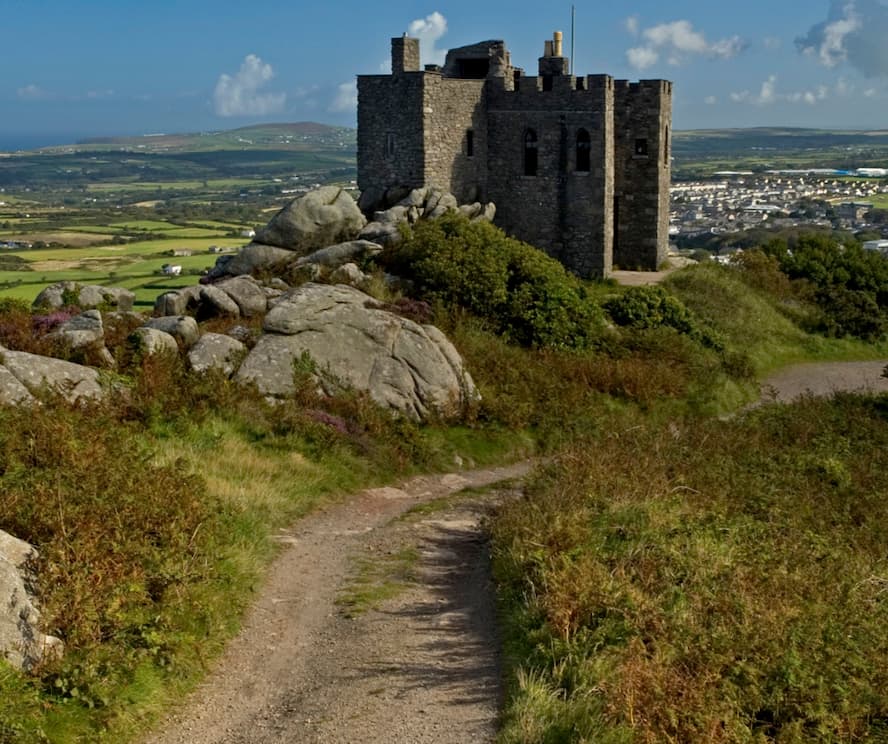 A picturesque medieval church that sits low on the dunes overlooking a wide expanse of golden sand. It is the only church in Cornwall located on a beach.

The earliest mention of a church here was in 1332. This tiny church differs from the usual traditional rectangular church layout with its three-hall design. These halls are thought to date back to the 15th century.

Inside are a number of interesting historical features.

Its coastal setting is stunning, it sits almost hidden behind the dunes and a few steps from the church door give you a lovely viewpoint of the golden sands of Gunwalloe Church Cove. 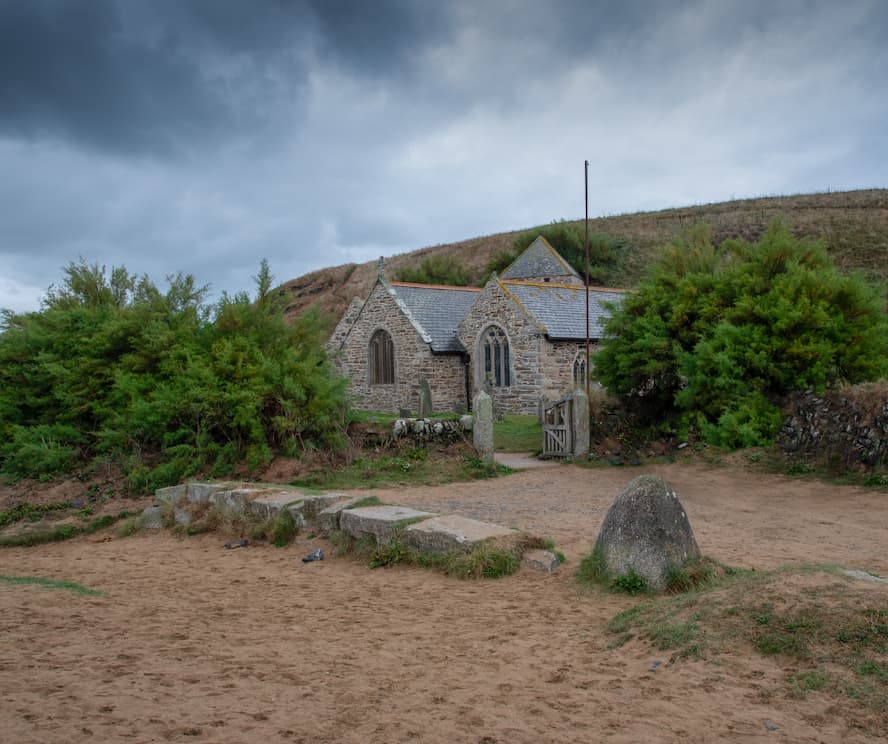 This unique open-air theatre sits atop a gully overlooking the coast in Porthcurno. Built by the incredible hard work and dedication of Rowena Cade, its creator. Enjoying a dramatic setting, it is carved into the granite cliffs.

This iconic theatre looks like it has always been here in its unique setting, but it is less than a hundred years old. Rowena along with her co-workers mostly constructed the theatre with hand tools and the occasional stick of dynamite, working tirelessly in all weathers. Most of the structures you see there are created from concrete mixed with sand from the beach.

See her artistry influences in the etched complex designs into the wet concrete with an old screwdriver.

It is a breath-taking theatre in a spectacular setting that captures the overall atmosphere and experience. The Minack is rarely cancelled owing to bad weather so be prepared to brave the elements.

Check it out with a visit, or catch a live production, a full programme of live events and shows operate from May to September each year.

The village of Veryan is famous for its five round houses, that are situated at the entrances to the village. There are two at each entrance and one tucked away behind the village school. They were built in the early 19th century, and these thatched circular structures topped by a cross were used to guard the village from evil. As there were no corners the devil would have had nowhere to hide! but most likely built this way for economic reasons.

They are thought to have been built in the 1800s by the Reverend Jeremiah Trist for each of his daughters. But it seems they were lived in by his tenants or labourers of the village.

The distinctive and unusual round cottages really stand out and are a unique feature of this picturesque village.

Veryan is a wonderfully peaceful and picturesque setting.

A quirky National Trust property that is found in the charming village of Tintagel. A charming and unique medieval stone cottage with lots of historical interest. Dating back to the 14th century, this stone-built house has served a number of purposes over the years, it began as a yeoman farmhouse and its final use was as a post office in 1870 but, it has always been a home.

Full of character with its famously wavy roof, winding staircases, historic rooms furnished with antiques and many nooks and crannies, that all add interest. It is easy to imagine what the property was like through the ages as you wander around. 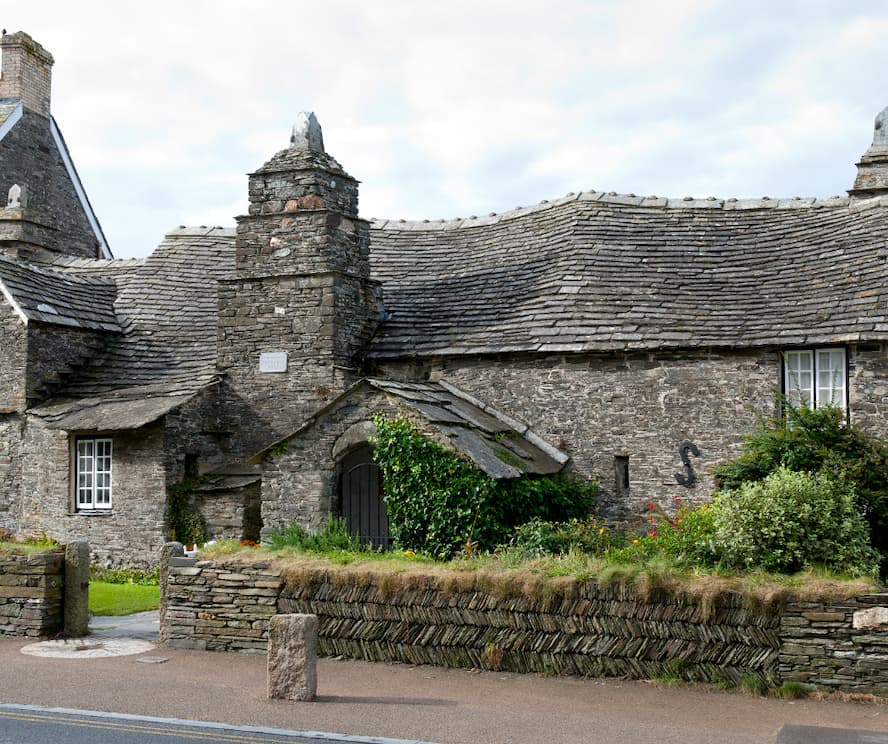 This iconic building here in St Ives houses the famous Tate Gallery. The former gasworks overlooking Porthmeor Beach and the Atlantic Ocean was redesigned by architect’s Evans and Shalev and opened in 1993. It has since been further extended and again the original architects were involved in some of the design process.

The new blue-green ceramic tiled extension blends in with its coastal surroundings; the tiles take on the same sheen as the sea and provides a seamless link between the old and new structures. The building cleverly conceals most of its extension underground where in a deft of engineering 15 metres of granite bedrock was excavated to establish a submerged gallery.

Overall, it is a stunning building with lots of natural light.

Built in 2001, the Eden Project is a distinctive and very unusual building consisting of a series of biomes built into a reclaimed china clay pit. The building is sympathetic to its surroundings. The giant greenhouses are constructed of inflatable plastic cells supported by steel frames. There are two main biomes; the Rainforest Biome covers about 16,000m² and is 50m high - you could fit the Tower of London inside it, or 11 double decker buses on top of each other. The Mediterranean Biome covers about 6540m² and is 30m high.

These biomes are a fantastic example of unique and sustainable architecture, as they were designed to need as few construction materials as possible.

There is also an external botanical garden that is home to numerous plants and wildlife native to Cornwall and the UK.