We’re all Going on a Shipwrecking Hunt 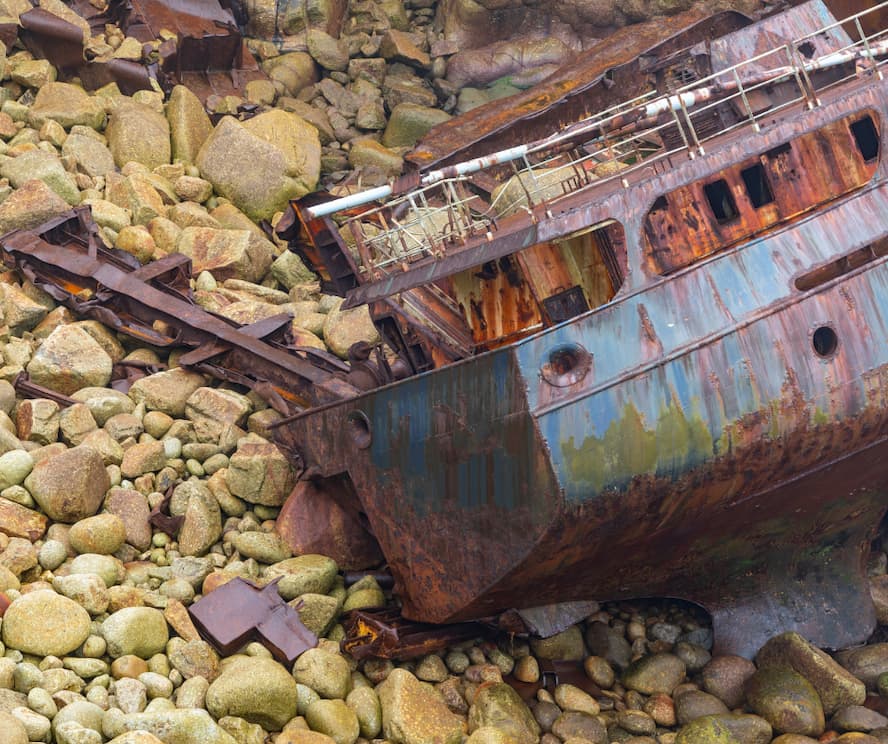 Shipwrecks conjure up images of pirates and smugglers and Cornwall has certainly got a long history and association with these. Although not all shipwrecks were plundered and subsequently sunk many were the result of bad storms that saw their demise.

The coastline is a fabulous place to explore not just for its stunning scenery but also for its many shipwrecks located off the dramatic coast. There are said to be 6,000 ships wrecked off Cornwall’s 250 miles (400km) of coast. These ship graveyards are found amongst hidden coves.

The notorious coast around the Lizard Peninsula is dubbed “The Graveyard of Ships.”

The Seven Stones Reef off Land’s End alone has wrecked 200 ships. Another notorious reef is the Runnel Stone, just south of Land’s End. In the 43 years from 1880, thirty steamers were wrecked there. Shipwrecks are valuable to Cornwall; they provide a unique environment for fish and shellfish to reside. This results an abundance of fish around the Cornish shores.

Some of the numerous shipwrecks that can be seen around the coast are:

This German sailing ship went down during World War I, it is located near Trevose Head. It is thought to have gone down in a storm.

The ship is called the SV Carl and was wrecked on 7th October 1917. It was being towed to London to be broken up for scrap and broke its tow. Most of the ship was salvaged, and she was left to rot on the beach. What remains is in pretty good condition despite being under sand all these years.

It is sometimes exposed in the winter or at low tide depending on the level of sand.

Located in a little-known cove is a cargo vessel, it was shipwrecked here about 16 years ago.At the time it was transporting 2,200 tonnes of scrap car plastic from Cork, in Ireland to Lubeck, Germany. When apparently the captain’s trouser leg got caught in a lever, he fell over and was knocked unconscious. The other more plausible story is he got intoxicated and passed out. When he woke up the ship was floating in the direction of the coast and struck the jagged rocks.

When it struck ground, it measured 294ft. Thankfully all six of the Polish crew members were lifted to safety and merely treated for shock. Sadly, the ship’s hull was punctured and leaked diesel into the ocean along with much of the plastics and car scrap metal it was caring; causing a significant amount of damage to local sea life.

There was a major salvage operation to remove as much of the cargo as they could. You can capture an excellent view of the wreck from the cliffs above; or if feeling up to the challenge you can climb down to the cove via a steep cliff path for a more thorough look. 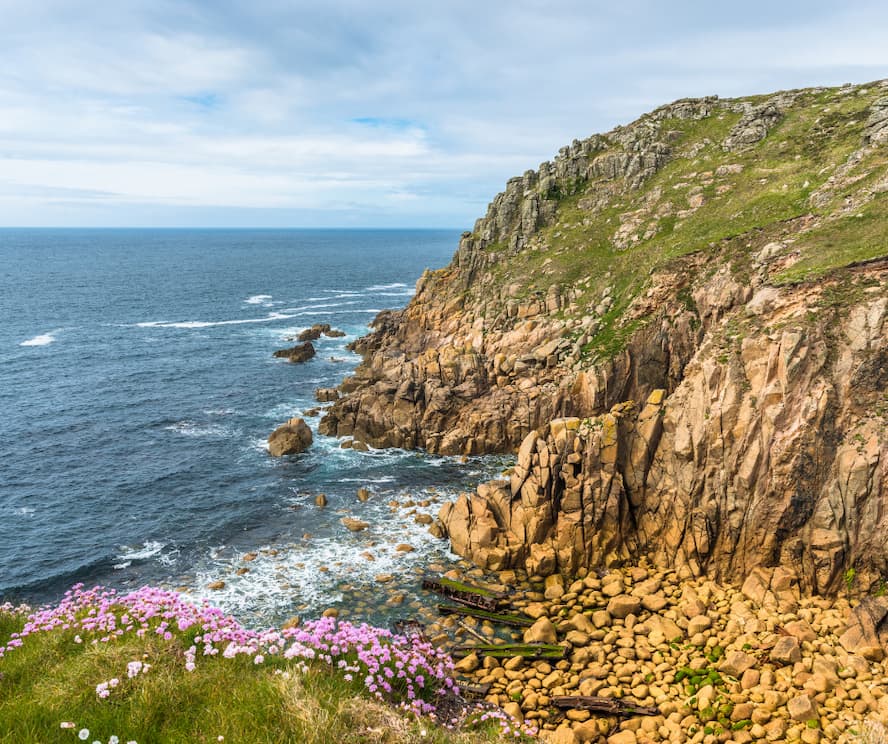 In the waters of Castle Beach are the remains of a German submarine UB-128, it was most likely wrecked after the first World War ended. It was heavily salvaged, but it breaks the surface at low water. The fragments of five other boats can be seen at low tide on Castle Beach.

Maenporth Beach is home to the wreck of the Ben Asdale, a freezer trawler. On the evening of 30th December 1978, the crew were offloading fish into the hold of a Russian factory ship. When she went to cast off her stern rope fouled her rudder and as a result would not respond to her helm, the hydraulic steering completely failed. She was incapable of resecuring to the anchored Antarctica owing to fierce gales. The anchor failed to hold, and they were adrift at sea and struck the jagged rocks.

A Mayday was sent, and locals seeing the drama emerging risked their lives in the treacherous seas to rescue the crew members. A rescue helicopter, despite the appealing conditions managed to winch eight crewmen to safety. Unfortunately, three crewmen lost their lives trying to swim to shore.

At low water, you can walk around to the remains, till visible is a large deck winch, the ships eight cylinder diesel engine and some other small pieces of its superstructure remain.

For more than 100 years this ship has revealed itself in the sands of this gorgeous bay. It is believed the remains are of the SS Francia, a 700-ton steam-powered Argentinean coaster, although this has been unconfirmed. It encountered it demise after setting out from Newquay with a cargo of coal, in 1917.

A large amount of the vessel is thought to have been salvaged, and the remains are what can be seen.

This Portuguese ship ran ashore in fog on 20th November 1917.

The crew of thirty-three was saved, but the ship was irreversibly damaged, her back was broken. She was sold to ship breakers for salvage.

The propellor shaft was salvaged and supports Barrel Rock at the end of the Bude Breakwater.

The wreck is exposed at low spring tides scattered across the beach.

During bad storms in 2014, a French fishing boat got into serious trouble off the north coast of Cornwall.

A RNLI lifeboat tried towing the trawler but was unsuccessful owing to the enormous waves. They were as high as 30ft and there were 60mph gale force winds.

The boat had lost all power and no steering and was being pushed towards the ragged coastline. A dramatic rescue by the Sea King helicopter secured the safety of all the six crew members from the cold waters.

Meanwhile, the trawler was left to run aground and smashed into the rocks near Park Head. The boat was abandoned and left to rot in the sea. The hull can still be seen smashed and twisted on the rocks. In the days following the incident, cargo from the ship began washing up on the shore.

The notorious Doom Bar has taken many ships over the years. Several shipwrecks can be observed from the coastal path at Trebetherick Path.

SS Maud was a steam trawler that was being towed from the Isle of Man when it ran ashore, whilst under tow on 11th February 1912, it foundered and beached. All her crew were saved.

The boiler from the wreck can be seen at low tide.

The SS Alba was a steamer that was wrecked on the night of 31st January 1938. The steamer was on its way to Wales from Italy, with a cargo of coal when it decided to take shelter from raging seas. The captain mistook the lights of Porthmeor for the lights of St Ives, and the steamer went aground on The Three Brothers Rocks.

The lifeboat Caroline Pearsons was launched and succeeded in getting twenty three crew members off the ship and to safety before the boat capsized and was washed into the rocks. However, on the way back to shore the lifeboat overturned and with no working engines was driven ashore. Rescuers managed to save all five RNLI crew and eighteen crew members, five of the crew drowned.

The boiler of the ship remains on Porthmeor Beach

The wreck of the SS Vulture protrudes from the sand at low tide.

All three ships were wrecked with in a half an hour period during a storm.

The Cinatra ran aground on the beach. Out of the twelve crew, seven lost their lives. The five crew members to survive were rescued from the crashing waves by a breeches buoy, fired from the shore.

The Bessie was smashed to pieces by the tumultuous surf whilst anchored.

The Vulture ran aground, and all her twelve crew were rescued by rocket apparatus.

All these ships were only yards away from each other.

On the odd occasion you can see fragments of their remaining hulls on the shore of Carbis Bay. The anchor of the Cintra was recovered from the seabed in 1959 and can be seen on Smeaton’s Pier, St Ives.

The engines from a German World War II high-speed torpedo boat can be seen on the beach at low tide. It is believed to have run aground when being towed on 5th October 1946. Salvage workers left the boat to break up on the beach.

There are three massive engines, a prop shaft and some gearbox and crankshaft assembly’s all grouped in one area. Scattered around are various bits of metal almost hidden amongst the rocks.

The best view is from the top of the cliffs. It is normally visible for three to four hours during low tide. Wedged amongst the rocks is the steel hull as well as scattered pieces of metal.

On 3rd March 1922, the fishing trawler the Marguerite was out fishing in the Channel and when a dense mist caused the captain to lose his bearings. Just before dawn the ship ran full tilt into the jagged rocks in the middle of Talland Bay.

The ship had safety equipment onboard to send out a warning. After some initial confusion, the crew of twenty-three including the captains, ten year old son were rescued by the Ryder Lifeboat and Trawler Dorothy.

The Margurite was never fully salvaged and broke up where she lay. Today the boiler only becomes visible at low tide even though it is reasonably large.

There are plenty of significant shipwrecks to be seen as you explore the coast.