Wild Water Swimming in and around Cornwall 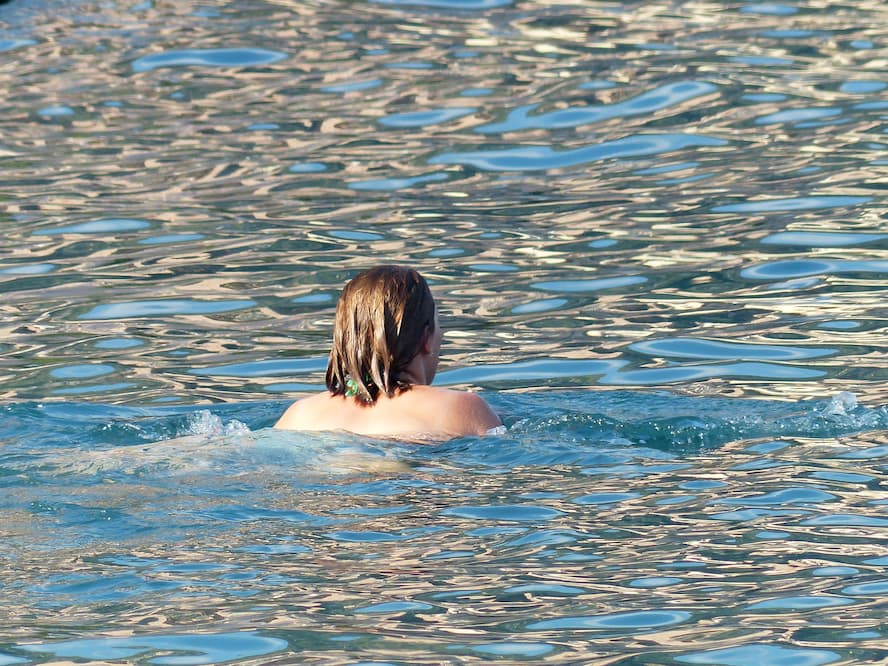 Wild swimming is an activity that has garnered huge popularity in recent years, after all what could be more healthy, exciting and invigorating than a dip into natural fresh clean waters, under blue skies.

Wild swimming is effectively swimming outdoors, in an exposed place that is surrounded by nature. It is activity that is free of charge and available to all which aids in its popularity.

Health benefits are numerous including but not exhaustive, boosting circulation, good for organs, aids better sleep, exfoliates your skin, boosts immunity and increases your metabolism too. If you were looking for a reason to take the plunge, you should be convinced now.

These committed wild swimmers do not rely on the weather and you will find them taking a refreshing dip on a hot summer’s day as well as on a cold and wet winters day. They revel in the sense of freedom it gives them and the exposure to the elements, the connection with nature, it is a proven method of relieving stress, you will find yourself emerging refreshed from the water. True wild swimmers will enter the water with no wetsuit!

Cornwall is ideally suited to this activity being that we are surrounded by sea as well as having an abundance of places to take a plunge like rivers, tidal pools, waterfalls, quarries and outdoor pools, amongst rugged scenery. You can choose from salt or freshwater venues that are found throughout the county, and there are many secret places if you want to avoid, the crowds.

The temperature range of the ocean in Cornwall is generally round 9 degrees in February when the water is at its coldest, to 20 degrees in October, when it as its warmest.

It goes without saying that you should be practice caution at all times to remain safe, if you are a newcomer to wild swimming it is best to stay with lifeguarded beaches and swim within the red and yellow flags.If going alone make sure to let someone know where you are going. Take care if jumping or diving in as you might not know what obstacles are lurking under the surface, be wary of tides and obstructions such as seaweed that could entangle in your legs. If you are unsure of the water’s conditions, play safe and don’t go in!

It is a good idea to bring along some warm clothes and thick socks to warm up afterwards and prevent your core temperature dropping.

Please avoid trespassing onto to private property there are plenty of spots available to the public to use.

These are a selection of places we recommend for both newcomers and experienced wild swimmers.

This involves a bit of a trek from the nearest car park across dramatic Bodmin Moor, it is a picturesque walk that alone is worth visiting for. The disused quarry is a secret, spring-fed quarry lake in a small grassy amphitheatre, dotted with wildflowers. It is a real suntrap and the perfect spot for swimming and has lots of space.

With a number of beachy areas and gently sloping shallows to the crystal clear but cold water. As it’s a quarry lake the water is very deep. The quarry stones surrounding the lake are flat and perfect for sunbathing on after an invigorating swim.

If you are adventurous, you can jump into the deep waters from the overhanging ledges of the quarry cliffs, a must for any adrenaline junkie.

Owing to its location, it is often deserted and because it is not immediately visible being hidden from view by rocks, it can be missed by people passing by.

These falls are one of the most popular beauty spots in Bodmin Moor and comprise of a group of stunning cascades and waterfalls that make up part of the River Fowey, as it meanders through the ancient oak woodland of Draynes Wood.

The waters can be quick and dangerous however, there is a plunge pool at the bottom of the cascades that is perfect for a refreshing swim, do take care not to slip on the slippery rocks.

A beautiful and idyllic natural spot. 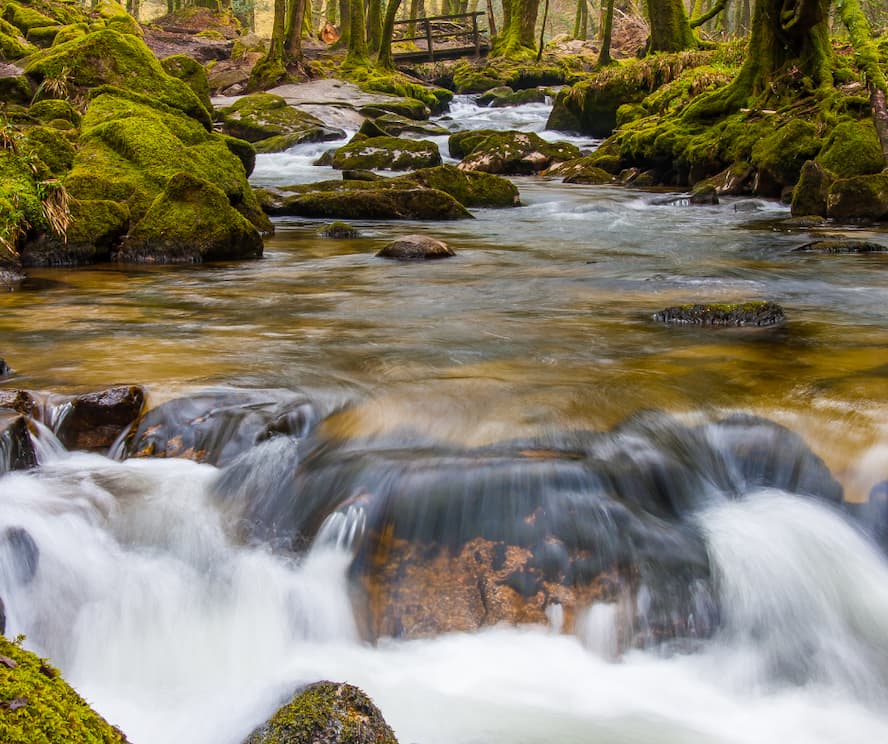 This beautiful semi-circular secret cove is home to a small sand and shingle beach carved from the rocks, it makes up part of Lanliver bay, near Looe. It is a popular spot for wild swimming owing to its crystal-clear waters and secluded southerly aspect. Swimming is best from half tide and above.

On a warm summer day, it can get busy especially at high tide when the beach area is small.

Access involves a walk through a pretty coombe, there is a stream that crosses the beach and a small waterfall at the end, known as Reed Water. A real hidden gem. 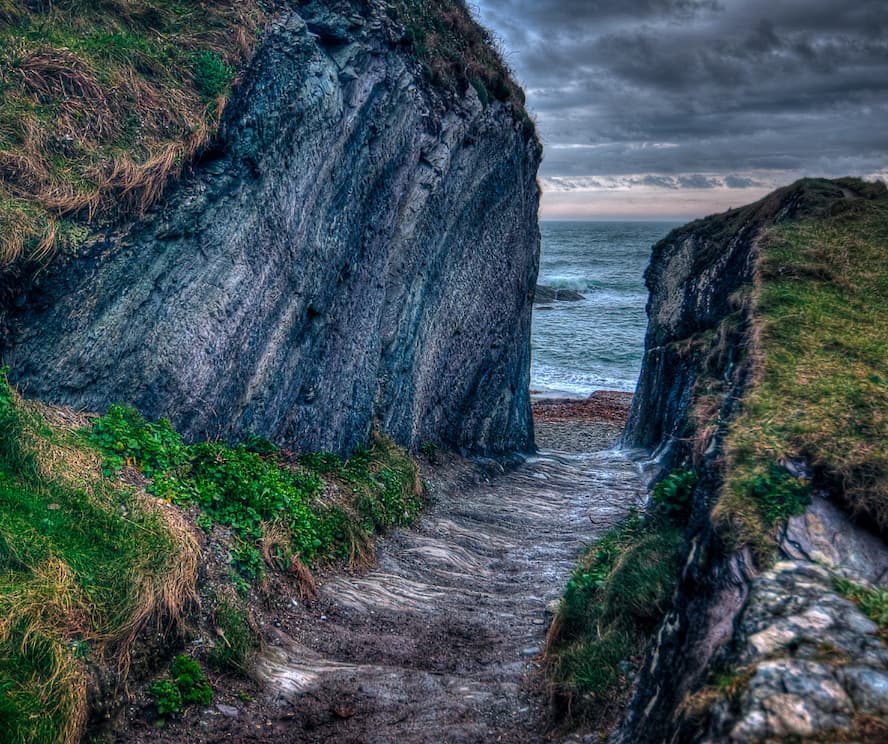 The stunning Nanjizal Beach is found off the beaten track about a mile from Lands End; it has no direct access from the road and involves a walk through farmers fields to get here.

There is a beautiful waterfall that provides a continuous stream of water into the plunge pool. The white sands on the bottom of the plunge pool is responsible for the bright sub-tropical colour of the water. The pool is generally full of water regardless of the tide, and the water tends to be calm. There is a fabulous passageway that the sea has naturally carved out, running directly through the rocks and you can watch the waves gently lapping as you swim.

At low tide, you can swim through the “song of the sea” a tall slit in the cliffs, the rock arch, and snorkel into sea caves gleaming with coralline. Swimming is safe within the confines of the cove.

A truly stunning unspoilt location with lots of charm and magical and enchanting views. Located on the National Trust’s Lanhydrock estate, amongst semi-natural ancient woodland you will find this discreet swimming spot. The five-arched medieval bridge spans the river and is reminiscent of a setting out a fairy tale book with a sense of magic about it, as the sun dapples through the canopy of trees overhead.

It is especially beautiful in the spring when the forest floor is carpeted in bluebells.

The water is 1.5metres deep in certain places. You can swim against the current, it flows fairly briskly, afterwards relax on the shingle beach area by the lower footbridge.

This could be the loveliest beach here in Cornwall, the dramatic bay is framed by Logan’s Rock on one side and the Minack cliff-top theatre on the other. It involves a tricky descent down the steep cliff path with no steps, so is not suitable for everyone.

Once here you are rewarded by a tidal beach with crystal clear turquoise waters and soft golden sands. At low tide it creates a minicircular sand island. Off shore sand bars create shallow lagoons that warm in the afternoon sun; a picturesque paradise.

It is a secluded and excellent spot to while away the heat of the day paddling in clear turquoise waters. Be aware the beach does disappear at high tide, so keep an eye on the tide.

This remains a truly local beach in West Cornwall and is not the easiest to find. It is located on the wild stretch of coastline between Pendeen and Morvah, giving it a truly remote feel.

It is owned by the Duchy of Cornwall, and this tidal beach is a delightful sandy cove found at the end of a shallow valley dominated by fissured granite cliffs, with a freshwater stream and a cascading waterfall. It faces due south so is both sheltered and secluded. The blue-green waters are calm and welcoming but beware it is a steep shelving beach that can create a strong under-tow. It can also be plagued by large amounts of seaweed that can make swimming unpleasant.

You do need to take care need when walking in the deep sand as the sharp remains of the wreck of the Alacrity, a small cargo ship which grounded here in 1963, are still buried and often exposed.

A further beach appears at the base of a slipway at Boat Cove during low tide.

Lying just offshore are Kenidjacks, a threatening outcrop of semi-submerged rocks that appear to surround the cove. It is not uncommon to see seals here.

An idyllic beach in an equally special location. 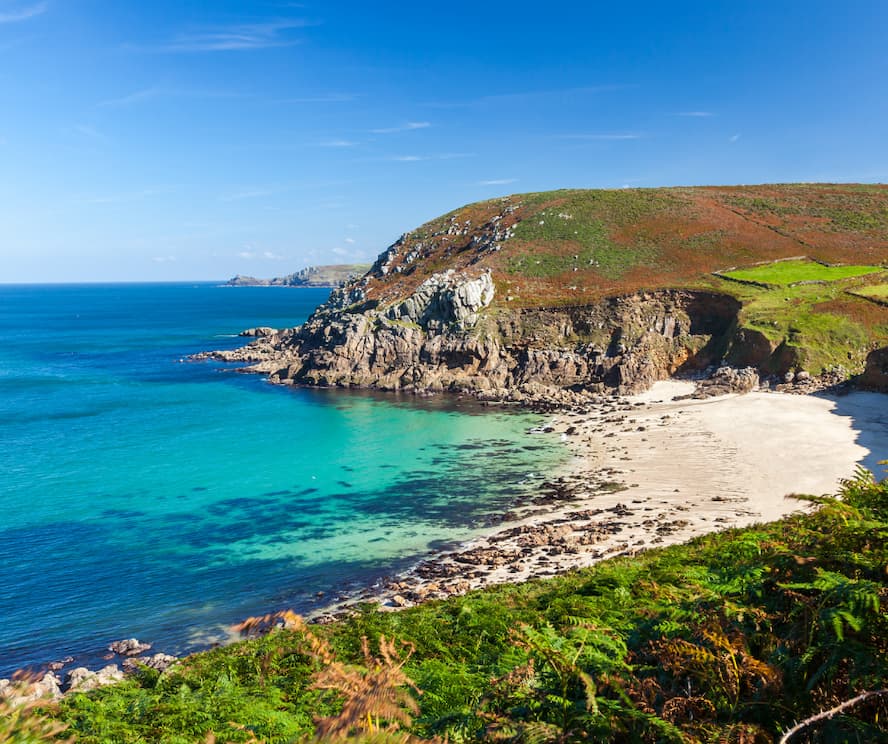 You could easily think you are somewhere more tropical in this incredible and relatively secret bay, featuring a shallow lagoon and shimmering turquoise waters. Access is via a steep slipway.

Porthgwarra has minimal sand at low tide, some interesting rock pools and has a secret tunnel. There is also a rope by which you can descend to giant caverns as it is treacherously slippery on damp days, as well as a secret beach on the far side of the bay.

Swimming is safe within the confines of the cove, but there can be strong currents near the western point. Afterwards sit and enjoy the silence of this enchanting cove, or watch the seal play.

Magical Porthgwarra Beach is a remarkable spot on this rugged coastline and should not be missed. 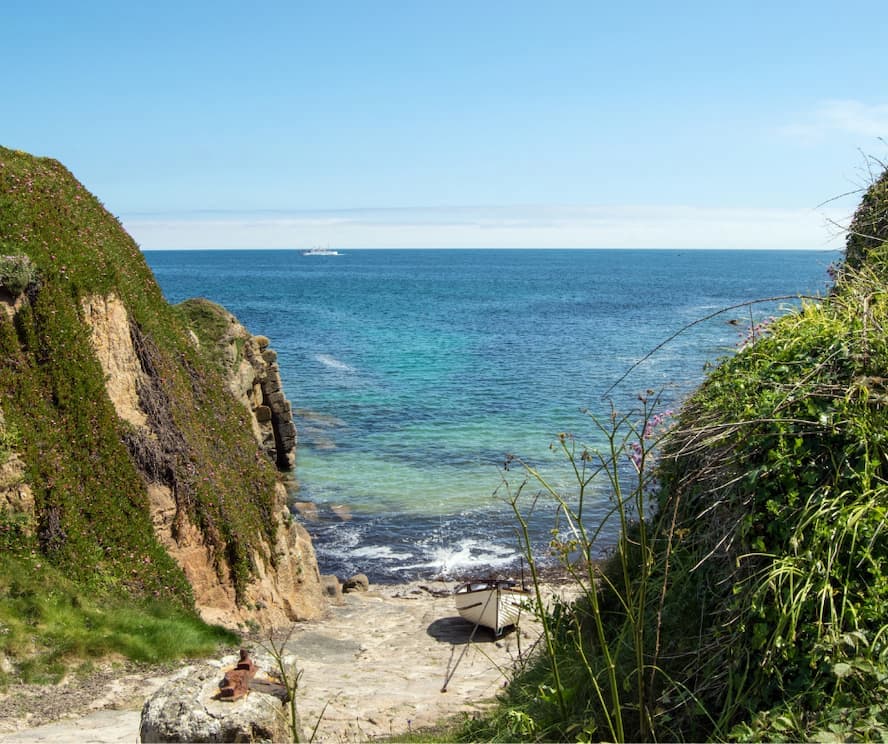 This picturesque and tiny coastal hamlet is home to less than fifty local residents and remains pretty much unspoilt, it has two secluded beaches East and West Portholland, that join at low tide to form a wide expanse of sand, backed by a granite sea wall, with rock pools at its feet. At high tide they are two individual coves joined by a walkway or road over the hill. Streams cross both ends of the beach.

East Portholland has the biggest area of sand but at high tide the beach is covered. West Portholland has a shingle and stone bank at high tide which gives way to sand. The clean and blue waters provide safe swimming, as long as you remain between the headlands where it is sheltered. Swimming beyond the headlands exposes you to strong currents as it is here that the English Channel meets the Atlantic.

A secret treasure here in Cornwall. 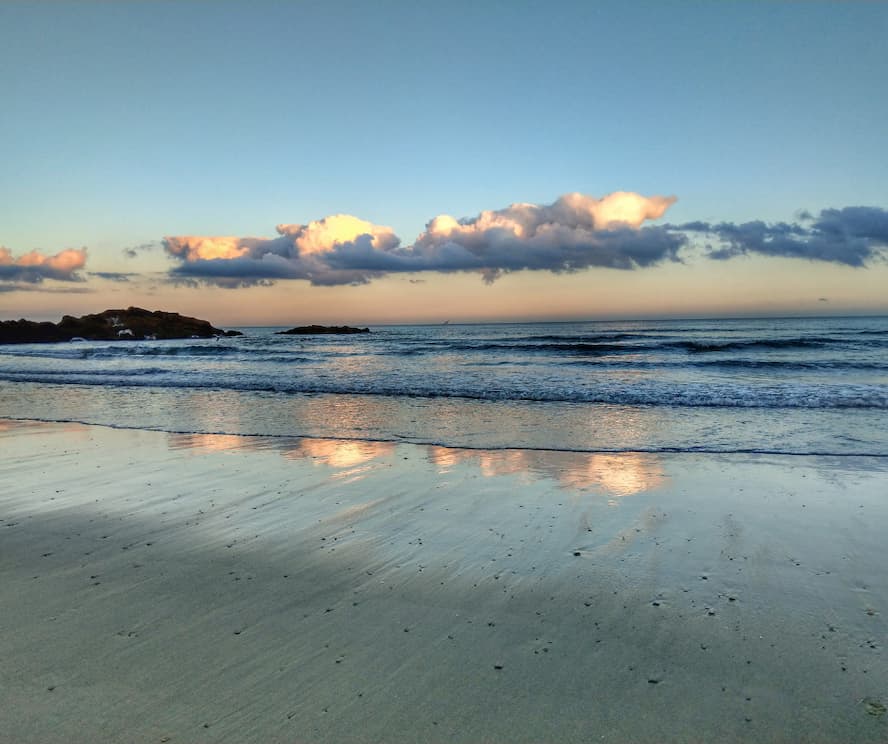 Located at the head of a wild woody dingle is a tall, slender waterfall. It falls an impressive 60ft first into a high basin, then flows through a circular hole where it plummets into a small plunge pool, the kieve, which is 1.5m deep and 5 metres wide. This pool is often deep enough for a swim especially after a heavy rainfall, the water is incredibly refreshing, some say icy cold! And is a magical wild swimming spot.

Steeped in myth and legend, it is also a beautiful spiritual spot, the waters are said to have healing powers, it is an intriguing place to visit. 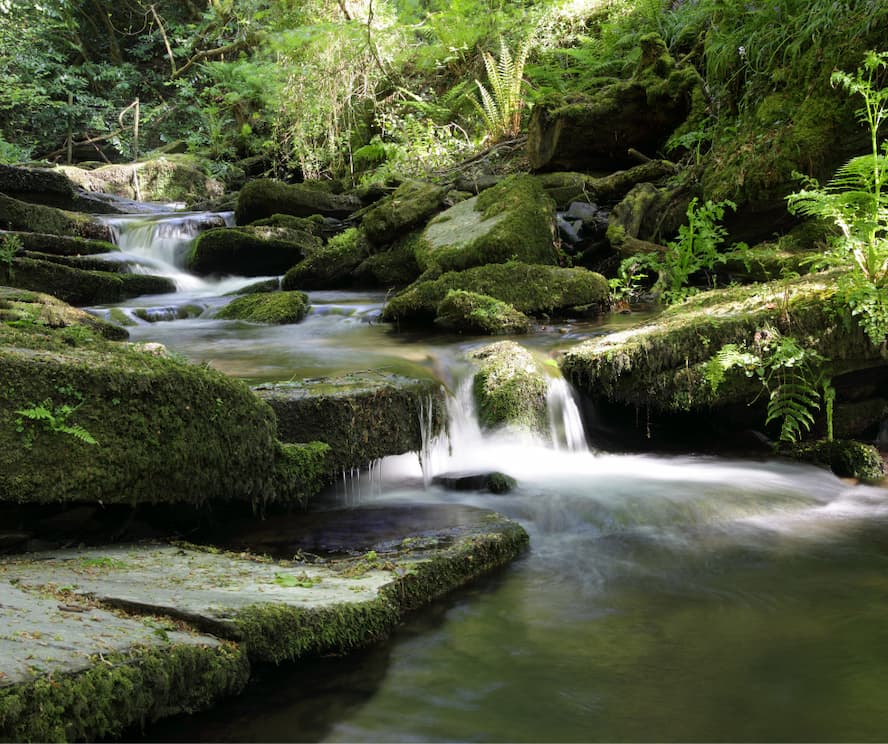